I’m here to answer questions, for a judgement on my soul
Clinging to a lifeline, holding onto hope
Pinned down on a table at the mercy of machines
The software coldly calculates, no bargaining or pleas

There but for the grace of God go I

Bruises, purple flowers, cover healing punctured veins
Dark posies slowly fading in the passing of the days
Keep faith in strangers‘ fingers as they search a withered arm
The sterile sting of cannulas that probe under the skin

A smile back to the darkness, a wink to hide the pain
Black blood in the chamber, shadows in the ward
Staring at the heavens through a ceiling in the clouds
The hum of empty corridors, the trails of lonely ghosts

And there but for the grace of God go I

A circus of consultants troupe on to centre stage
The closing curtains whisper, I hear the hushed debate
Slipping out of consciousness suspended in real time
The chorus of the monitors, the drip feeds down the line

There but for the grace of God go I

Angel with pop star braids staring at the ground, …
He only smiled he didn’t speak, she hung around till he fell asleep

… she only wants to know
Is daddy coming home again?

He shuffles past, belly sagging, his underpants grey and ragged
Dull mind in a dull cage
You know that he’s seen better days
He sucks deep on his nebuliser, eyes closed in a moment’s peace His chest racks, his lungs exploding
Coughing like a drowning man

Guilty eyes and steady fingers lay the strands of shredded leaves
In a bed of bleached white paper, a moist tongue seals his fate
He rolls up his habit’s rations
Stacking up the coffin nails

He lights up under weeping birches, he shelters from the drizzling rain
Amputees in roving wheelchairs close circle to deny the gnawing pain

And there but for the grace of God go I 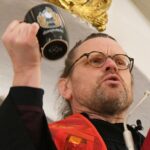